Between The Lines - Ch 09: Running Lures

Anything you tow behind the boat will do the job of attracting fish as they are incredibly inquisitive and are attracted to rather than frightened of the boat itself. Essentially, anything that moves through the water and is able to be caught by a predator is likely to be thought of as food. In saying that it is unquestionable that some of the things used to attract fish do a rather poor job of it while others have quite spectacular success. The factors that contribute to making teasers work are essentially the same as that of lures, that of correct action such as vibration, colour etc.

Without question, the most obvious teaser is the boat itself and it's engines due to the vibrations this combination creates. It would also seem that the larger the boat and engines, the more effective they are. For instance, big diesels and wooden hulls seem to be the ultimate fish attractors. No boat and engine configuration actually scare fish, they all attract them on the troll to some extent.

Not having the ultimate fish-attracting boat and engine combination is not a disadvantage, as, with the aid of teasers, you can match all comers in a competitive atmosphere.

The lures we use are all teasers; in fact, that's exactly what their ancestors were. Someone eventually realised that if you stuck a hook in them they could actually be used to catch fish. A good pattern of lures working in harmony certainly does the job of attracting, teasing and catching all at once.

There are two main types of teasers. The traditional teaser is still directly attacked by fish and often has to be pulled out of the water to get the fish to switch to something with a hook in it; they essentially represent some type of food to the fish.

The other type is that of the exciter which works by getting the fish worked up and are designed to increase the competitive reflex in the fish - the exciter is designed to appear to be another predator in the area. Of course, we can't be sure about this until we get to talk to a fish!

Despite the fact that anything pulled behind the boat will act as a teaser, there are several that are quite effective and popular, such as the following which all attract billfish of every species and many other gamefish including mahi-mahi, wahoo, yellowfin and other tuna species:

Bird Teasers come in many sizes although the most common are 8-14-inches in length. They flutter on the surface with their wings putting out quite a bit of high-frequency vibration and sheets of water that may imitate fleeing baitfish. They are generally rigged with daisy chains of rubber squid and hookless lures to add drag that in turn makes the bird 'flap' harder. They are effective both close to the transom as shown or run a long way behind the boat as a teaser where they were originally designed to be run for tuna.

Note that the daisy chains also put out vibrations and are often run from the outriggers with or without birds and lures attached to the chain. 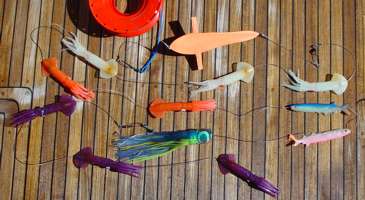 Delta Wing Teasers are one of several systems that have multiple chains of squid, bubblers, soft plastic fish and other attractors set up as multiple daisy chains that work off a plastic or perspex frame. Others in the same family are spreader bars and drogues. They essentially try and imitate a whole school of fleeing baitfish. They are very effective for species such as sailfish and other small billfish under 200lb.

They are not really an option for smaller boats due to the sheer size of them and the difficulty in deploying them without the daisy chains becoming tangled. 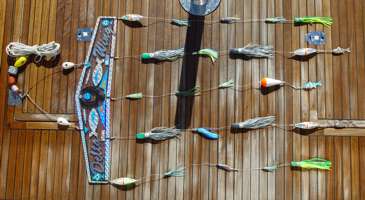 Tinny Teasers are not generally taken as seriously as they should be. Few other surface teasers put out as much deep-toned vibration. Note that low deep-toned vibration travels much further than higher pitched vibrations. They are very easy to make, in fact, it can be a full-time day job just getting replacement tins ready! Use a minimum of four or as many cans as you wish on a rope spaced evenly about every two feet. 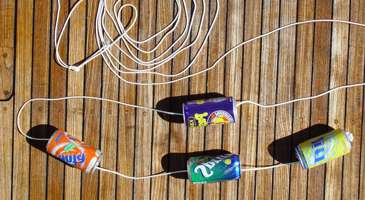 The Pakula Witchdoctor Exciter runs deep and rocks from side to side putting out deep throbbing vibrations with mirrors flashing sheets of light. The Witchdoctor never comes to the surface to tangle other lines. They are very effective for all gamefish species of all sizes including larger marlin. The vibrations put out by the teaser are similar to a large predator and brings out the competitive nature of all game and sportfishing species. 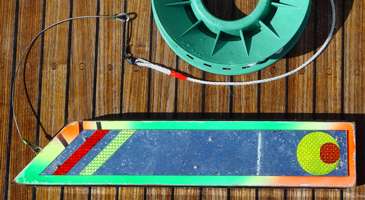 Music, certainly loud music, with a heavy bass and drum beat does work in attracting fish as the speakers resonate through the hull into the water. There is much debate on which tunes are the best.

Teasers of all types are very effective. They often put out more vibration than the lures you use and as a result, the fish can come directly to the teasers rather than the lures. To take advantage of this, lures should be positioned just behind any type of teaser you use.

The only limit to what can be used as an effective teaser is your imagination. Although it is unlikely you will improve on some of the original designs on the market, you can certainly come up with some that may work well. You can also use teasers in combinations such as the bird teaser with a daisy chain of squids and lure. You can also hang daisy chains of squid from the same line that is used to tow the witchdoctor.

Other factors are that the rope and construction of the teaser, which should not be stronger than the item, such as a cleat that you tie it to, for obvious reasons. Part of this is when retrieving teasers ensure you are able to let it go easily and safely without tangling hands in the teaser line or feet if it loops. Teasers may be grabbed by fired-up fish right up until they are brought into the boat. This can also be the case with all other items including lures.

There is no limit to the number of the teasers you can run at the same time as long as you can clear them quickly and out of the way when the action starts. They are certainly more necessary for smaller boats to compete against larger boats, even though few large boats troll without using teasers.